Last week, Wednesday evening, I attended a talk by Malaysia's "Condo King" held by PAM (the Malaysian Institute of Architects).

Dato' Tong studied architecture in Australia, came back in the sixties just in time to experience the economic slowdown of 1964, brought about by "konfontasi"- between Indonesia and the newly formed Malaysia. His first job was with DBKL on a year to year contract. When his time was up, he set up a small consultancy doing unglamorous jobs to survive.

After some time he thought, "instead of working to help other people make money, why don't I make money for myself". In 1968, Sunrise Properties, his famous development company was born. However, success had to wait with a return of hard times. This time it was the "13th May" incident in 1969. But not too long later Sunrise started with a few shop houses, terrace houses and other small schemes, mainly in his hometown of Klang. Then he started with terrace factories, and with this high margin product, he made his first fortune.

Next, he got involved with politics, spending the next 10 years in politics, (he appears to recount this period with a tinge of regret) became a State Assemblyman, but in the 1982 elections, he lost his seat! Returning to Sunrise, he found that it had hardly advanced since he left. And for some reason, it was now involved with, of all possible ventures, gold-mining. It took 3 years for Sunrise to extricate itself from this venture. But what came next made it all worthwhile.

In 1984, Sunrise started on it's first condominium - O.G. Heights. The company had somehow acquired a 10 acre site adjacent mainly vacant bungalow lots. Instead of terrace houses, Dato' Tong bet on high rise apartments. It wasn't easy. Nearby terrace houses were selling for about RM130,000 and the project's apartments were going for between RM70,000 to RM130,000. This was in the midst of a recession; it took a lot to get customers interested. 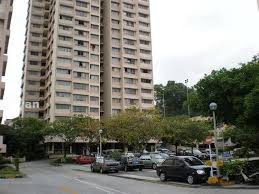 The project was launched in the old Kimisawa supermarket in nearby OUG Heights, with the Mayor in attendance. He set up teams of dedicated salesmen, knocking on doors. He held concerts, with songstress, Elaine Kang wooing in the crowds. And during the concert evenings, he had the contractors work overtime to impress the people who came. Building skywards, freed up land for landscaping and recreational facilities. The project boasted of not one, but two swimming pools, multiple tennis courts, squash courts and children's playground. This was not just apartments, this was a new category in the property market - the condominium!

OG Heights became a hit and the subsequent phase sold very well. Undertaking it taught Dato' Tong most of what he needed to know to make a the mark he was to make in the history of property development in Malaysia. He had bought, reluctantly at first, a ten acre plot of land in Segambut. Despite it unglamourous location and its lack of an actual road frontage, Dato' Tong could see that this land was in a strategic location. He found that there was an unmade access reserve leading to the land, he bought more land off this access reserve, and he got an agreement with the City Hall that he would build the road at his own cost. If developers of neighbouring land also wanted to use that road, they would have to contribute a share of the cost. And the name Segambut wouldn't do; the new area was given anew name: "Mont Kiara".

This was the 90's and Sunrise rode the boom market for as long as it last lasted. He was introduced to aluminum formwork, adopted it, and got it working so well that he was building condos faster than City Hall could approve them. He could afford mistakes, In the case of "Sophia", the condos were initially meant for silver haired retirees (only for +50 year olds). But they soon needed a severe re-marketing. Eventually, it sold off without too much damage to the bottom line.


Fast, fluid and flexible. These words weren't invented by Dato', but when he first heard them uttered, he recognized instantly that this was his motto.

By 1996, at the age of 62, Dato' Tong decided to retire. He took a lucrative offer and sold Sunrise. The timing was good: two years later came the Asian Financial crisis. But Sunrise is still doing well. The purchasers of his condominiums, from OG Heights through to his Mont Kiara projects, have all done well, becoming very profitable investments. As it turned out, Dato' Tong's "retirement" turned out to be an extended golfing holiday. He's now back with his new vehicle - Bukit Kiara Properties - which he describes as a boutique developer. At the young age of 77, there's no clue at all as to when he will finally call it quits.

Dato' Tong' s lecture offered several lessons for would be developers. One is the inevitability of hard times. He has a keen memory of the economic recessions: in 1964 (konfrontatasi), 1969 (13th May), 1984 (the worst recession, he says), 1998 (Asian financial crisis), 2008 (US and Europe still not recovered). So be careful! Yet taking risk is a necessity for developers - being fast, fluid and flexible helps. Even so, defeat or loss is often inevitable. Then, the ability to bounce back comes into play: the loss of his job at DBKL, led to better one, and then led to his own consultancy. The loss of an election led him to his real calling - the business of property development. What doesn’t kill you makes you stronger!

Another lesson he offered was to beware of bankers - especially when times are good. Study the small print, especially where it says that the loan will be subject to annual review. He also had a specific advice for budding architect-turned-developers: when you become a developer, think like a developer, not like an architect!

I asked him after the lecture the one thing about regulations on housing that he would like changed. His answer came without hesitation - it was to discourage low density terrace housing. He was initially pushed into high rise high density housing by economic and commercial factors, but he now sees low density terrace housing as creating an unsustainable sprawl. Ha,ha,ha (...LOL to younger folks). His response touched a raw nerve - I felt like Dato' Tong (without knowing about me and my work) had challenged me to show how Tessellation planning can be applied to high density development – the very issue that is preoccupying me now.
Posted by Mazlin Ghazali at 6:50 PM