Overcoming the Problem of Car Parks for High-Density High-Rise

THE PROBLEM OF CAR PARKS FOR HIGH RISE
Malaysia is reputed to have one of the highest levels of car ownership in the world. The planning requirement for apartments is two units of car parks for each unit, plus another 10% for visitors. This is a very high requirement compared to most other countries and has the effect of making our high-rise housing expensive.

As we design taller buildings to achieve higher densities, just adding on parks on the ground is not the way to do it. The additional area required to cater for the additional car parks increase the development land required: since density is units/land area, increasing the numerator is pointless if at the same time, we increase the denominator.

To achieve higher densities, multi-level car parks are necessary. They can be placed in an adjacent block or below the tower. Constructing an adjacent block is cheaper but at the cost of being requiring an additional area, hence resulting in a lower density. But whichever of the two, the effect on the distribution of built-up area is that a large built-up area is now dedicated for cars: the net sellable area becomes a smaller proportion of the total built-up area. Car parks takes up a lot of space. Each car needs an 8’ x 16’ space that works out to 128sf. The driveway takes up 20’. All in all, with ramps and having to consider building columns and staircases, the gross built-up area required for one car park is about 260sf: in fact, actual car parks make up less than half of the total area of a multilevel car park block. Two car parks for each apartment plus another 10% for visitors takes up 572sf of car park built-up area. This is more than half the size of a typical affordable apartment.

Net sellable floor area expressed as a percentage of total built-up area for high-rise, including the multi-level car park plummets is often less than 55%. The fact is, the car parking requirement for high-rise high-density housing has become a very heavy burden on the cost of construction.
Again, PR1MA is aware of this problem and have produced their own guidelines which try to address this problem. In their table, A1, the car park provision for rural areas is set at 2.2, suburban and urban areas at 1.65 and 1.1 in cities. Although this standard may face resistance from local authorities and householders used to the convenience of having two cars, in the longer term, promoting a less car-dependant life style makes sense.

Already, the average size of households in Malaysia has peaked , bringing down the average number of cars per household. With the expansion of public transport in Kuala Lumpur and the Klang Valley, plus the explosive growth in share-riding services like Uber and Grab, owning a car is not essential for young working people, as it once was. I believe that PR1MA can do a good job in convincing local authorities home-buyers to buy into the concept of the compact city that promotes high residential density, mixed use and is oriented towards pedestrians rather than cars.

The efficiency of car parks can be operationally improved by doing away with parking spaces that are strictly allotted. As currently practiced, car parking spaces are allotted as accessory parcels to each owner. However, this ends up with a lot of car parks being empty for long periods. A pooled system, as found in commercial buildings, can cut this slack, providing more car parking opportunities with fewer actual slots.

In fact, PR1MA’s guidelines presumes only two basic options – a stand-alone multi-level car park or a podium car park that sits below the building block. 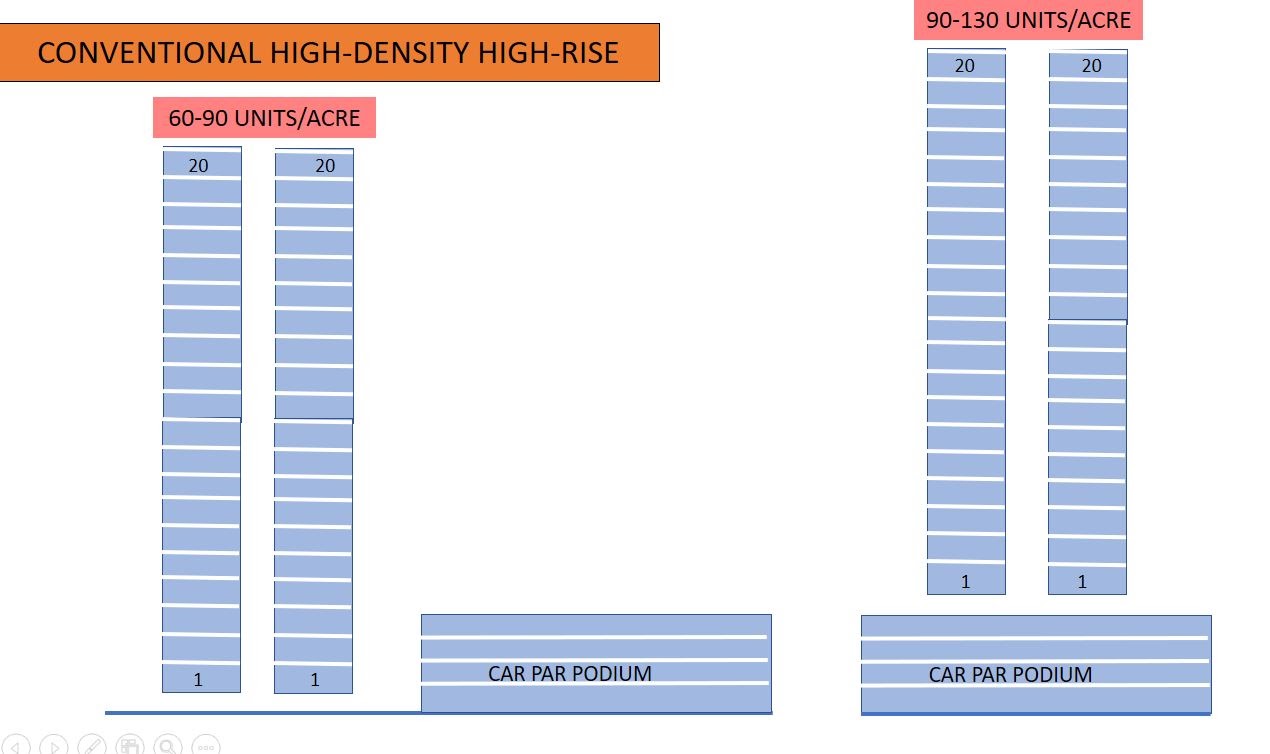 The latter is of course more efficient than the former. But the podium is still a poor choice. The podium takes up space larger than footprint of the tower or slab block above it. This increases the land area that is needed.  The car park podium also must be set back from the boundary by about 50’ from the front and 25’ from the side. Having to do so results in having fewer cars than car parks on the ground floor which are subject to much lower setback lines.

Is there a better solution?

The checkerboard-plan was conceived to be car park design-friendly with columns spaced in an 8m grid. A car park circulation system also fits neatly into the 5-layered grid with two roads inside the building footprint feeding car parks on both sides. 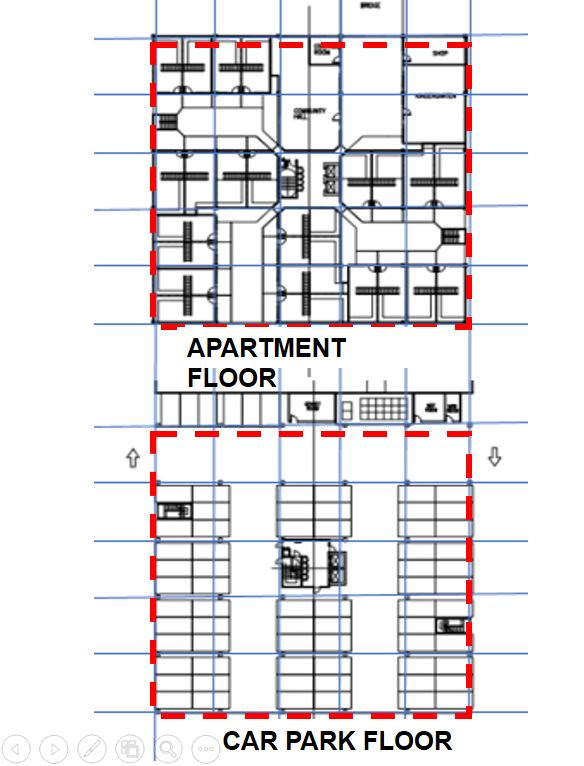 There is a road that circles the outside of the building: it too feeds car parks on both sides. The ground floor plan is shown below. 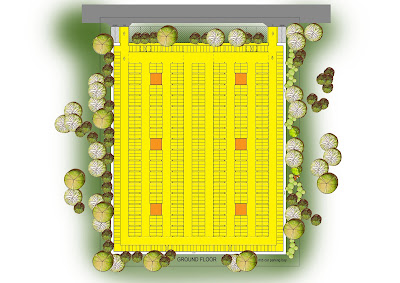 But can we provide for even higher densities? Is there an alternative to the conventional multi-level podium car park?

Our answer is to replicate the ground floor car parking layout in a basement floor. In fact, basement car parks are generally not considered at all for residential development because they are thought to be costly to build, needing temporary shoring and permanent waterproofed retaining walls, and costly to maintain, with a mechanical system to draw in fresh air and expel fumes as well as a smoke-spill system in case of fire.

Yet, a single basement level 7’ or more away from the boundary does not need temporary shoring or an expensive water-proofed retaining wall. An 8’ rubble retaining wall at the boundary plus a low 1’ concrete one on the car park building line will suffice, creating an air-well that provides natural ventilation, daylighting, a green planting strip and setback distance to meet current planning requirements. 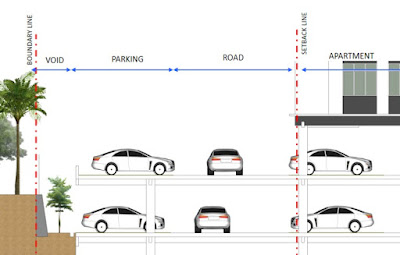 Figure 18 Perimeter Retaining Wall and Air-well
It is also easy to design an access to a single basement floor, doing away with having too many ramps as shown in the plan below. 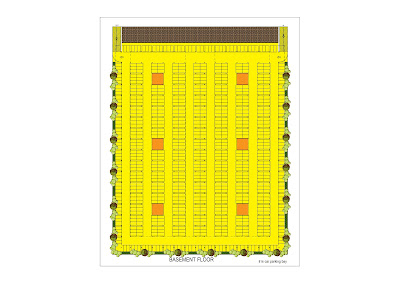 The options available are displayed in the drawings below. 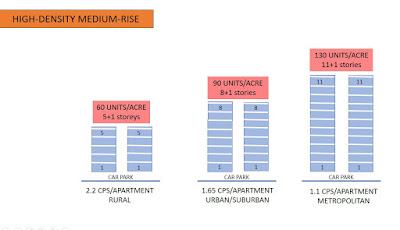 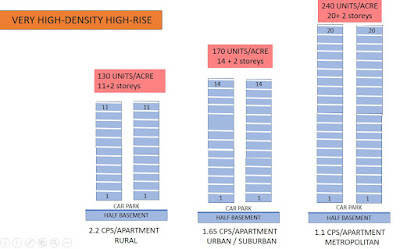 A design strategy that achieves high-density with shorter buildings and which either eliminates the car-park podium or else substitutes it with a low-cost single basement floor will surely reduce construction cost and time. Combining it with a lower car parking standard and as well as a loosening of the cap on density will further multiply the savings.


Continue to next Post
Posted by Mazlin Ghazali at 9:15 AM