When we look at major urban centres like Kuala Lumpur, Penang and Johor Bahru the problem of affordable housing appears daunting. The high price of land requires that very high-density apartments high-rise, but there is a cap on how many houses may be built on each acre of land. Even if allowed a higher cap, high-rise buildings are expensive to build.  Not only the apartments, but also the multi-level car parking blocks that must be built.

Here, we look at a high-density apartment design that tries to overcome three hurdles that beset affordability in the main urban centres of Malaysia: how to reduce the high cost of land, the higher costs of constructing tall buildings and the cost of building car parks.

REDUCING LAND COST BY BUILDING MORE UNITS ON EACH ACRE

One way to reduce the cost of land is to have more units share this cost. But the intensity of housing development in Malaysia is controlled by restrictions on the number of housing units that can be built on each acre. At present, most local authorities still only allow high-rise housing up to a density of 60 units per acre, but official thinking about it is changing.
Why do Authorities want to impose density restrictions? The answer must be that people are worried about the negative effects of overcrowding. However, we have already made the point that as we build taller Honeycomb apartments, we also add more green, social spaces that be used for gardening, social interaction and children’s outdoor play.

If indeed, providing each home a private and a shared garden can overcome the social defects of high-rise housing, then why not allow even higher densities, especially if it is to make living in the city more affordable? Very high-density housing is already a fact, albeit under the alternative name of serviced apartments. However, serviced apartments that have been mainly built on prime commercial land have generally been too small and expensive, geared towards investors rather than home-makers.

PR1MA, a government company tasked with building affordable housing, especially for urban dwellers, has come up with guideline that allow for much higher densities than is normally approved. This is a snip from their guidelines: 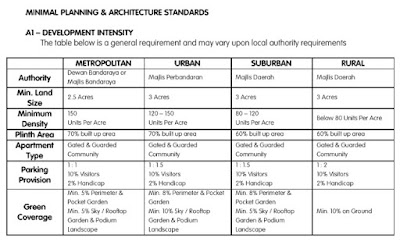 Given how various government bodies are rethinking the issue of development intensity, it makes sense to make the case for allowing higher densities as a strategy to make housing affordable. Doubling the density of a housing development effectively halves the cost of land for each unit. Not only is that a significant amount for urban land, there are also additional savings in the cost of providing infrastructural services for each unit.


The range of high-density options that will be explored below will include all the higher densities that PR1MA has asked for, as well as a prototype for around 200 units per acre.
Posted by Mazlin Ghazali at 5:51 PM