The Terrace Honeycomb Layout; a High-end Proposal in Petaling Jaya

We could see that although land-use efficiency and density of the Honeycomb layout were respectively higher and the same as terrace houses but that the plot ratio – the amount of built-up area compared with the development land area - would always be lower. This wasn’t a problem to us. To compensate we would design efficient corridor free layouts, or add attic floors.

But where land cost is high, the lower yield on built-up area obtained by cluster houses is a major disadvantage. Lower plot ratio means that the cost of land per square foot of sellable built-up area would be higher. In many urban situations where generous amounts of front and side gardens are unsuitable, the terrace house layout can maximize the saleable built-up area.

CAN TERRACE HOUSES BE ARRANGED TO PRODUCE A HONEYCOMB LAYOUT WHERE THE HOUSES HAVE PRIVATE AND SHARED GARDENS?

It took a long time to come around to ask this question - we had always had a Honeycomb vs terrace house mentality - but once posed, the answer came almost immediately.
This is the conceptual drawing of the solution. 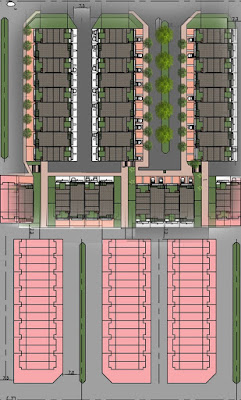 As can be seen, the advantages of Honeycomb housing have been achieved:
The key was producing a spine of terrace houses where the houses faced one direction then the other. You can see this spine running horizontally across the middle of the layout shown above. In this way cul-de-sac courtyards are consecutively created on both sides.

Still, the Honeycomb terrace house back lanes can be put to better use. Planning authorities have, over the years, been increasing the minimum width of back lanes, from 5’ to 10’ to 15’, and now it is 20’. At that width, cars can now traverse the back lanes and we can use them for access to car parks for residents placed at the rear of the houses.

This has the advantage of allowing the front yard to become a garden and freeing the front streets from all cars except for service vehicles and visitors’ cars. With the much reduced car traffic and the unfenced front gardens, the cul-de-sac street is better able to serve as an arena for social interaction and children’s outdoor play.

A SPECULATIVE PROPOSAL IN PETALING JAYA

There is a small enclave of government quarters in an old part of Petaling Jaya which is ripe for redevelopment. However, it is located in a well-established neighbourhood next to a forest reserve which has staunchly defended against development as a vital green for the Klang valley. Despite its strategic location, anything other than low-rise, low density residential use would be out of the question. 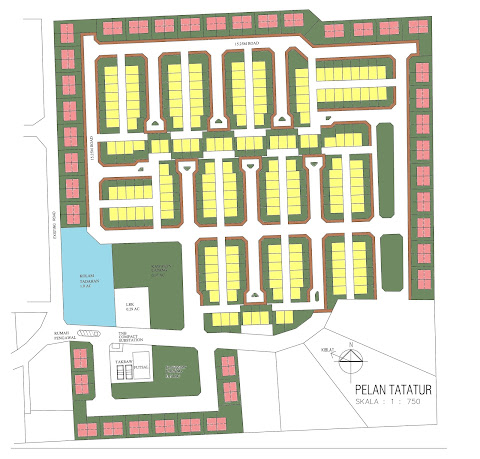 A well connected entrepreneur requested my firm to produce a preliminary design to put forward to the government; the case for the redevelopment of the dilapidated quarters is rather similar the case made for the Nong Chik development in Johor Bahru.

He asked that we design high-end terrace and semi-detached houses priced about RM1,500,000 or more. With only up to 12 units per acre, it was less likely to disturb the local residents and attract objections from them.

Semi-detached houses are laid out along the periphery of this rectangular site. An existing road is widened and adopted as the main entrance with a guardhouse. A club house and neighbourhood green area is placed just off this main entrance. The terrace houses are lined up in the direction of the slope, such that the back lanes can be set at a lower level than the front roads.

Having the garage for three cars on the lower ground floor allows the whole of the front yard to become a garden, and freeing the front streets from all cars except for service vehicles and visitors’ cars. With the much reduced car traffic and the unfenced front gardens, the cul-de-sac street is capable of serving as an arena for social interaction and children’s outdoor play, even without a shared garden.

The front-yard garden, first floor balcony garden and rooftop garden of each house is connected by a spiral staircase that allows access to a gardener without entering the house. It also allows the mistress of the house to walk down from the roof garden all the way down to the front sitting porch.

All the floors from the lower ground garage to the master suite can be accessed via a lift.
The layout of the semi-detached house follows that of the terrace house, except that one side of the house has openings looking out to a side garden.

Although, this Petaling Jaya project did not take off, another opportunity did present itself. It was also an opportunity to propose a more diverse mix of house-types for a small project in Jasin, Melaka.