Apart from the shop-house, the other building-type that I had developed as a solution to low-cost housing was the 5-storey walk-up flat.

Most walk-up apartments in Malaysia can be described as slab blocks. In a paper written in 2000 I argued that the point block low rise apartment is not only more aesthetically pleasing and socially functional, it is also an economically viable alternative.

In the previous six years, I had attempted to design low cost and low-medium cost housing that met the strict cost limits required by developers, the rules set by government authorities, and the same time achieve the aesthetic and social aims of my practice.

My firm approached this problem by designing and refining generic designs capable of being applied across the various sites, requirements and parameters of different projects. We promoted the point-block low-rise apartment as a generic design which is superior to the ubiquitous slab block low rise apartment.

The slab block low-rise walk-up apartment is the standard solution in big towns and cities in Malaysia. The typical design comprises four or five storeys of apartments strung out in two lines opposite each other with access corridors and voids in the middle, and staircases at both ends of the corridor 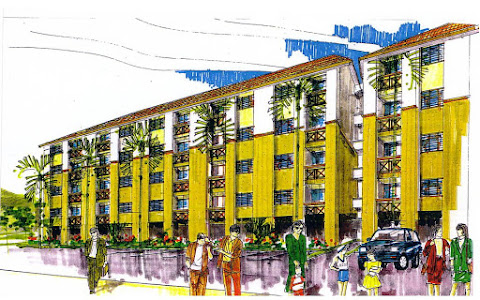 There are of course many variations to this basic concept. We just must adapt specific dimensions and layout to customize the design. The slab block, in my opinion is not very pleasing aesthetically, and in social terms, now too positive either. Its main advantage is that it is cheap. Certainly, it is cheap compared to terrace houses or bungalows because it use less land. Typically, 50 to 60 units per acre compared to 20 units / acre for terrace house and even less tor bungalows. The construction cost for unit is also low compared to the bungalow or terrace house because there are lots of shared walls, shared structure, floors and roofing.

Against to the point-block, the slab block certainly looks cheaper. And therefore, it is cheaper goes the implicit common-sense logic. I challenged that common-sense conclusion. 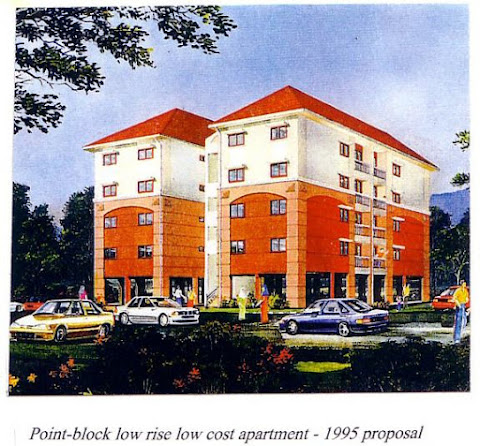 
Land is an important cost factor in housing. Commonly it is 10% - 20% of the total development cost of a mixed housing project. The accepted density for low-cost low rise apartments (in most States in Malaysia) is 60 units per acre. It is not easy to achieve this density in an aesthetically pleasing and socially acceptable manner. You can maximise units for any given plot of land by using bigger blocks. Right? Well, not always true.

It you have two similar round vessels of say 1 cubic meter capacity each and fill one vessel with large stones and the other vessel with small pebbles which vessel would contain more material? The vessel with the small pebbles will have more material. There would be less spaces between the pebbles compared with the bigger stones. In a similar manner, small blocks can fill up a site better than standard slab blocks. This tends to be true for big sites, especially sites with irregular shape. In the case of small sites, blocks designed to the shape of the land do better.

Small point blocks are more efficient compared to slab blocks. In particular, the corridor is eliminated and the staircase and landing area is minimal. It is usual for point blocks to have 60% or less of corridor and staircase space per unit. It is not in typical for slab block with double loading corridors'# to have 76sf (7sm) external circulation space per unit. Slab block with single loading corridors can have external circulation space 96sf (9sm) or more per unit. Architects sometimes think that the more units share staircases, the more cost effective the design, but the corridors that lead to the staircases also add cost.

This is about maximising space usage in units. In the point-block generic design, every unit is a corner unit. There is a cost penalty tor this - there is less shared walls between units and there is less shared beams and columns. However, there is a benefit - less shared walls means more external walls, and with more external walls for light and ventilation it is easier to design efficient and functional rooms. In our point block designs, we try to maximise usable space and minimise circulation space. In intermediate units of slab blocks, external wall is at a premium. Voids have to be cut out in the interior of the block to provide windows to receive what little light and ventilation these air wells can provide. Or else, the exterior elevations require deep recesses to bring in light and ventilation to the middle areas.

The depth of the units, often long in relation to the width, results in long circulation spaces required to access the outer rooms. This layout also involves other substantial compromises in functional design. Firstly, entrances are invariably at the dining area near the kitchen. This is not functional but seems to be the accepted standard even for medium to high cost apartments. Secondly, there will be some bedrooms, the kitchen, drying yard and some toilets which will have to make do with light and ventilation from air wells. Thirdly, entering the apartment from where the kitchen and drying yard is situated creates the impression of entering a home from its backyard. Fourthly, bedrooms are difficult to cluster together in a private zone separate from the semi-private living and dining areas. 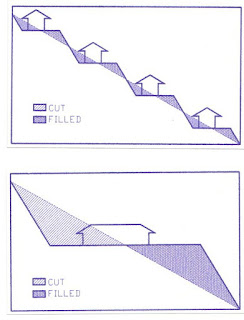 Blocks with small footprints require small earth platforms. Blocks with big footprints require larger earth, platforms. A series of small earth platforms generally involve less volume then a series of larger platforms cut out from the same original slope profile. From the same illustration, it is also intuitively clear that easier to arrange point blocks to sit on cut ground than it is to arrange slab blocks to meet this same requirement. Having original ground to sit on rather than fill ground can save a lot in foundation costs. Of course, slab blocks can be arranged along contours to minimise earthworks, though this limits the flexibility of the layout and is not effective where the land slope in two directions. Another possibility is to stagger the slab block down the slope, this requires retaining walls or stilts which again adds cost, and reduces standardisation.


Most low-cost flats in Malaysia can be described as slab block low-rise apartments. The ubiquity of this generic design, despite its functional and social inadequacies can be attributed to the misconception that, given the cost constraints there are no alternatives. But Low-rise point blocks in my opinion through more aesthetically pleasing, functional and socially acceptable can be more cost effective when compared to the slab block. 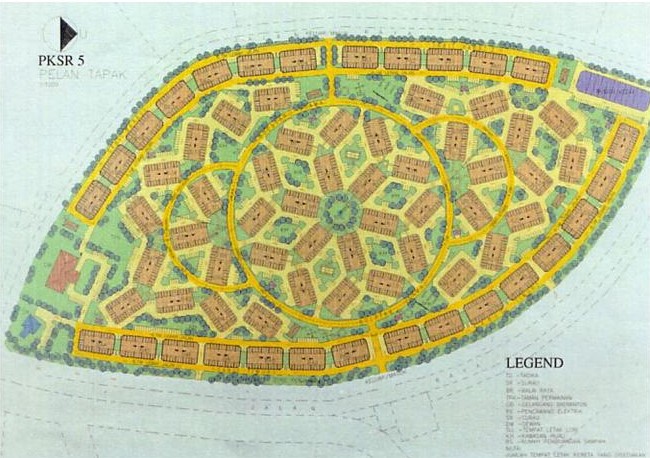 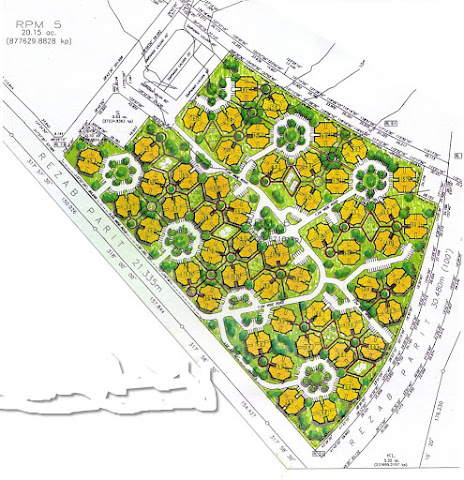 Back in 1995, not long after I set up my firm, I decided to focus on designing low-cost housing. We did not have any clients yet, but I made a bet that the demand for such housing would always be present, and if the designs we came up with were good, then commissions would come. The bet came good: in the following years, the government embarked on a programme to get the public and private sector to build for the low-income.

The government entrusted a government owned corporation, TPPT Sdn Bhd, to work with the private sector and State governments to build low-cost housing. The mood of the times is reflected in the book produced by a think-thank which was closely allied to the government: "Low-Cost Housing - A Definitive Study". The problem of housing for the low income was going to be solved!

This provided an opportunity for Arkitek M Ghazali to introduce our ideas for "point blocks": ie 5 storey walk-up blocks with only 4 or 8 units to each floor accessible from a single staircase . We found that point blocks were economical: the ratio of saleable area to total area we were able to get was more than 95% , compared to about 85% achieved by the conventional slab blocks which could have up to 16 units per floor accessed from a central corridor. 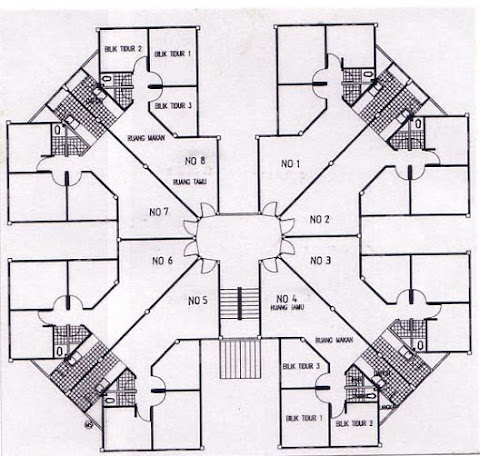 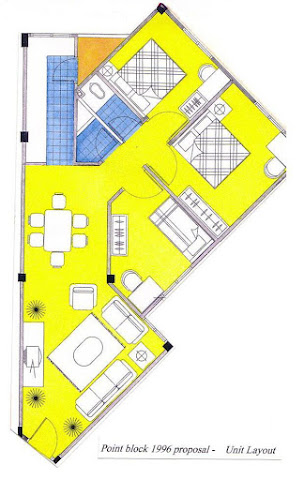 These point blocks were arranged in a hexagonal formation (the first hint of honeycomb housing). In terms of land-use efficiency, we found this to be as efficient as the conventional rectilinear layout. In addition, the point block concept created "defensible spaces" and I instinctively felt that the clustering of the flats offered a much more community-friendly environment.

The recession of 1997/98 put a stop to the would be boom in low-cost housing.

However, the firm was able to see quite a few of its ideas come to fruition:


Octagonal low-cost 5 storey point-block flats, eight units on each floor, laid out in a hexagonal grid in Nusajaya, Johor below: 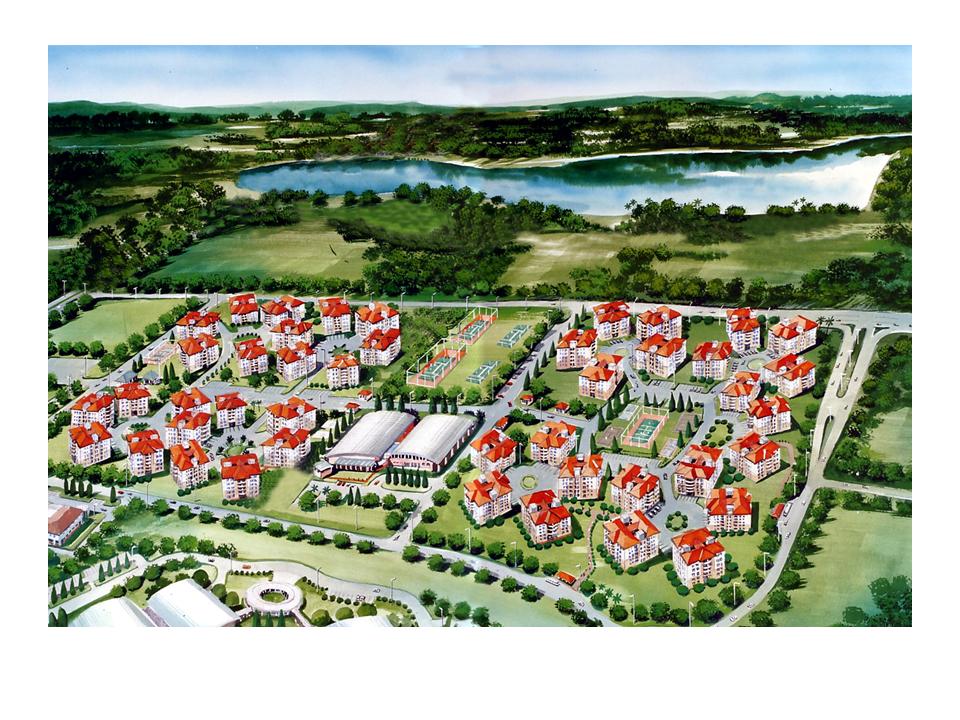 This 5-storey walk-up building concept could easily be married to the Honeycomb apartment idea...
Back to Table of Contents

Posted by Mazlin Ghazali at 9:09 AM