Single storey terrace houses were the most common house-type for rural areas and small towns. In urban areas where land has become expensive, single storey houses are not common any more for new developments. Typically, they occupied 20’X70’ plots of land and a few years ago would be priced at RM110,000 and below. However, they are expensive to build with a big area for footings and roof, a large party wall, and low density. Worse, they are perceived as less prestigious than two storey houses. 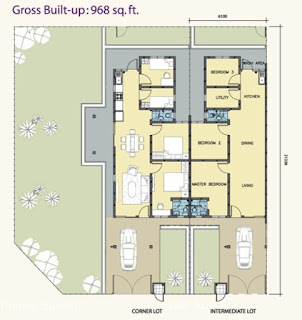 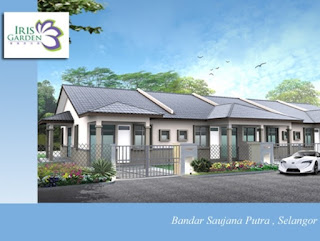 Now with building costs much higher than a few years ago, even developers in rural areas are shunning the single storey houses. The ones that get launched are also getting more expensive, leaving a gap in the supply of new houses in the RM80,000 to RM130,000 price range that used to be served by the single storey terrace houses.

For the solution, we looked to an existing type of residential unit in Malaysia which is called a “townhouse”. Introduced in the 1980’s, it is actually a large terrace house with different owners on the ground and the first floors. This relatively new building type, is for people who can’t quite afford a terrace house, but do not want to live in flats. 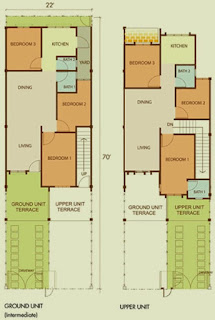 The Terrace Townhouse: Townhouse at Bayu Permai in Rawang; from from GM Build website 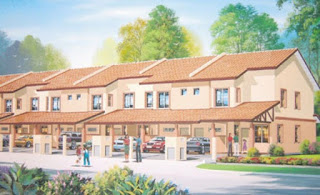 The terrace townhouses usually have only 22’ or 24’ frontages and this is too tight. The street fronting the townhouses has gate after gate along it: there is no space at all along the street for a second car, or indeed for any visitors. There is also too little external walls for proper ventilation and lighting for the rooms within them: the room layout gets very contorted as the various rooms compete for space for windows.

We came up with a cluster version of the townhouse. You saw a preview of it in north Johor in the last chapter "A Big and a Big Site". What used to be a sextuplex house was divided into upstairs and downstairs units. These townhouses can fill an important niche in the market: while the usual kinds landed property – terrace, semi-detached and detached houses – are becoming more unaffordable for many people, they are not yet ready to accept living in apartments. At about 1000sf built-up area, these would have the same built-up area as fsingle–storey terrace houses. They are cheaper to build than single storey houses because they have more shared walls, floors and roof, and each unit takes up a smaller piece of land. I believe that they should be priced 10% cheaper than single storey houses. 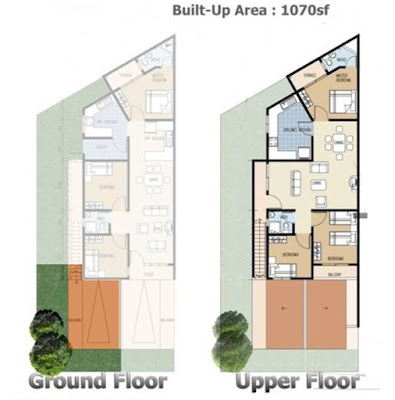 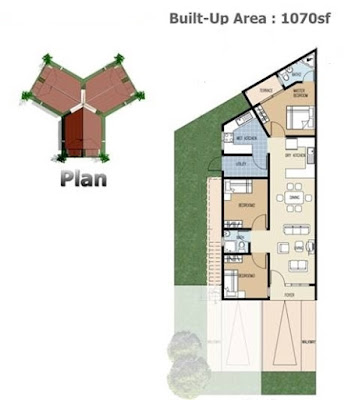 
The new Honeycomb Townhouse designs are an improvement on the terrace townhouses now already found in city areas. 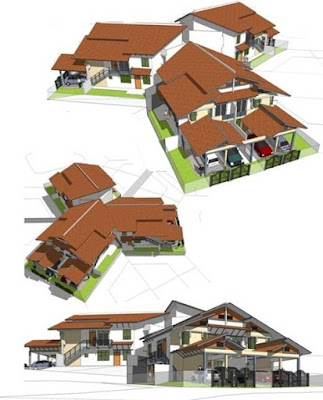 Perspectives of the Sextuplex Townhouse

The Honeycomb Townhouse has the advantage of being a corner unit with a garden to the side. There is more space for windows, and this makes the layout easier – there are enough external walls to provide windows for all the rooms. The Honeycomb Townhouse also has at least 30’ frontage. This means that after providing for the gates to the car-porches of the lower and upper floor units, there is still another 10’ to the side. In addition, the Honeycomb courtyard would mix quadruplex and sextuplex units, but only the sextuplex units are suitable for conversion to Townhouses (the quadruplex units have frontages which are too narrow). So the mixture of quadruplex and Townhouses becomes less crowded than a street of terrace townhouses.

There is also a rectilinear version of the Townhouse. The layout is much simpler. It is also possible to have a higher percentage of townhouses in this version because all the cluster blocks except the corner access ones can be converted from quadruplexes to Townhouses.

The developer, the Seri Pengkalan Group, which had experimented with the small Honeycomb project in Merlimau Melaka had a bigger problem to solve.

In Melaka, the level of affordability is low; the most popular product was the single storey terrace houses. However, as land prices and construction costs inched upwards, developers could only extract marginal profits from the terrace houses.

This was a problem for Sei Pengkalan too.

For their development just outside a small town, Alor Gajah, about 45 minutes from Melaka city. For some time they experimented with one and half storey terrace houses – products that they could sell at a higher price but which are supposed to be only slightly more expensive than the purely single storey house. However, providing a staircase that can take up 100sf that serves just a few hundred square feet in the attic space is inefficient.

I was able to convince them to build two storey cluster houses instead that had box-like plans that were easy to build. A simpler, cheaper version of the cluster houses at Bernam Jaya was adopted and they were priced attractively RM240,000. These, together with semi-detached houses (also similar to the Bernam Jaya ones) proved easy to sell. There were enough people in Alor Gajah who were able to afford the houses.

The harder problem was that there was still a large market for the market segment that single storey houses used to occupy – houses that cost below RM200,000 down to RM120,000. The State of Melaka by that time had instituted new rules that require a portion of houses to be sold at RM150,000 or less. To overcome this problem we proposed the cluster townhouse.

In Alor Gajah, we had designed 288 units of cluster townhouses. Due to the constraint on the selling price, the client insisted the buildings be laid out along straight lines to minimize cost. Still, priced at RM150,000 there was a considerable amount of trepidation on the part of the developer. After all, the terrace townhouse had proven itself to be unpopular; not too long ago, at RM150,000, purchasers could buy single-storey terrace houses. 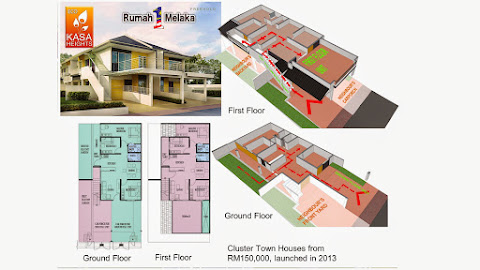 Nevertheless, the cluster townhouses proved themselves to be an acceptable alternative, and all the units were sold out in three months.