We can categorize existing high-rise apartment layouts by the method of access to each apartment - single or double loading corridors for slab blocks, and central lobbies for tower blocks and so on. We selected examples of the common and not so common typologies, analyzed their usage of space in the same way that we did for the Sky Neighbourhood example and tabulated the results. 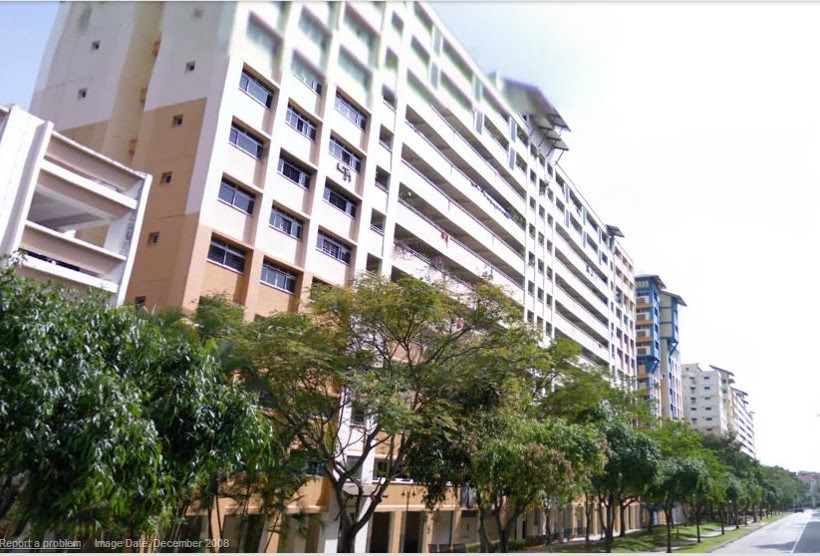 This plans shows the apartment block at Woodlands Drive 41, in Singapore with a “single loading corridor”. This arrangement is not very efficient. Circulation here takes up a considerable 18.8% of the total floor area.

Apartments with a central loading corridor is more efficient serving apartments on two rows along it. . However, compared with the single loading corridor, the ventilation and light from these air wells are not so good. 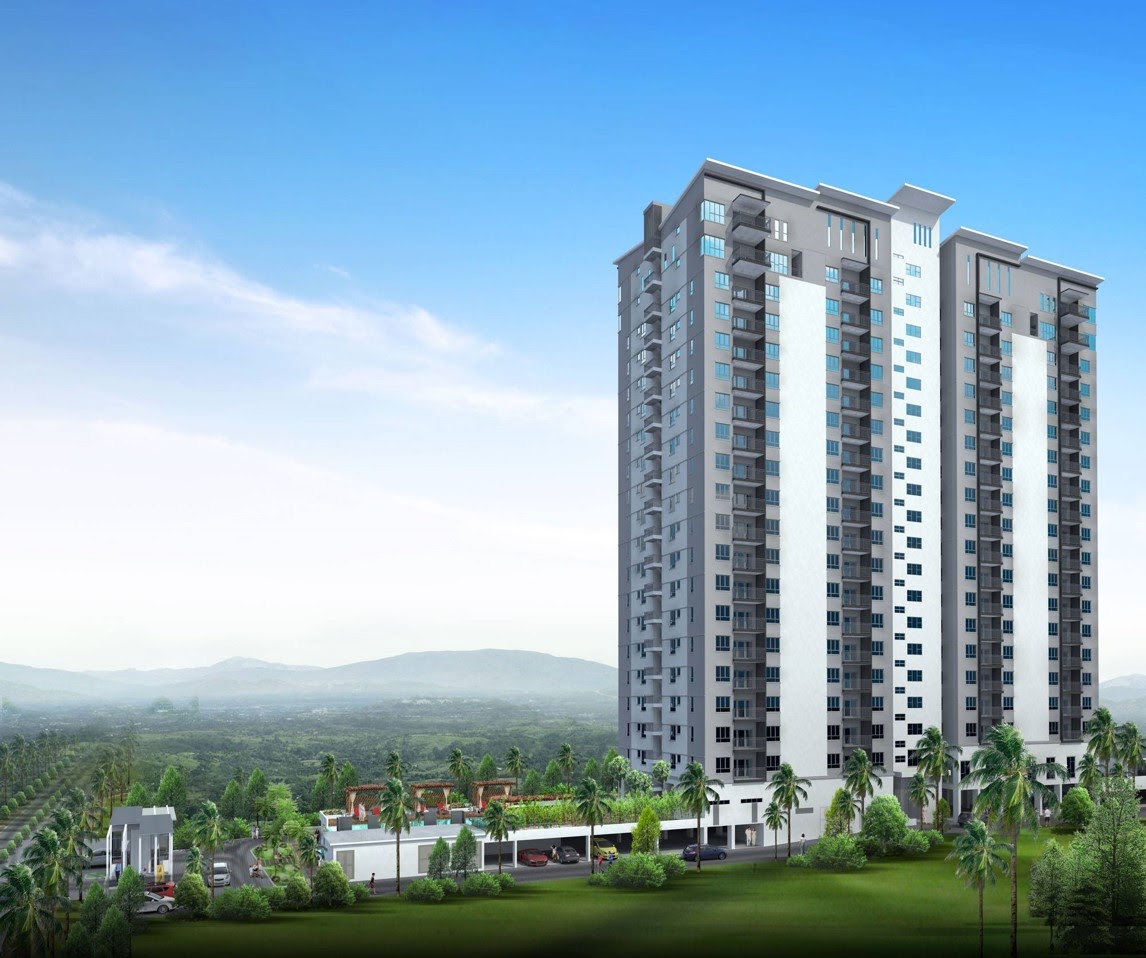 This is a view of Puri Apartments in Puchong, Selangor with a “double-loading corridor”. Here circulation makes up 16.03% of the total floor area. 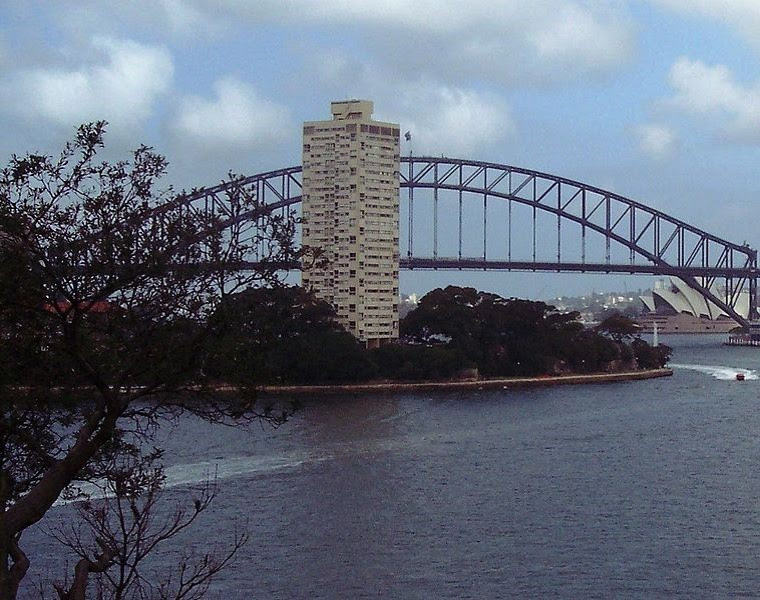 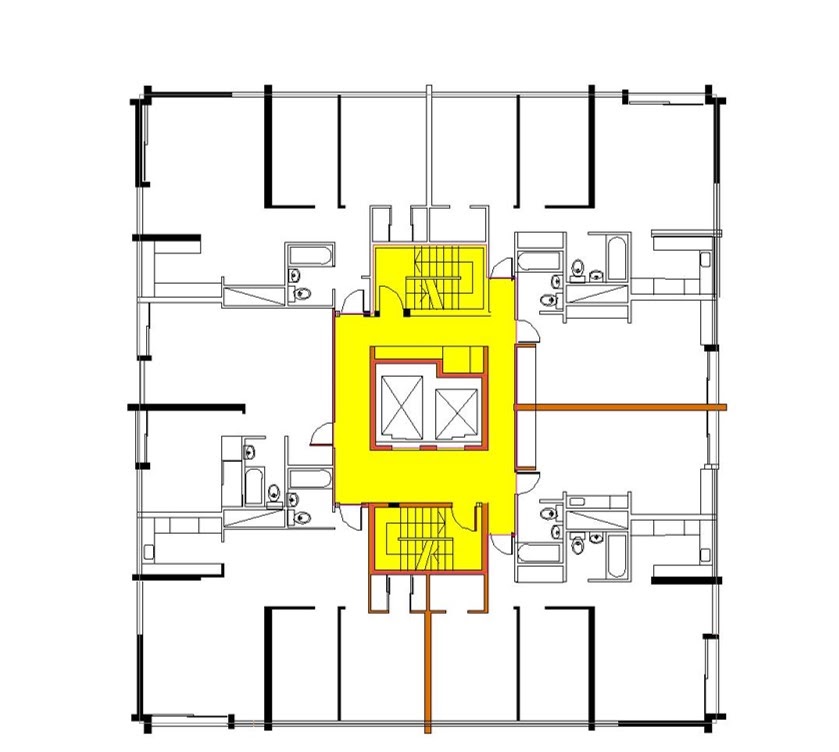 This is the Blues Point Tower in Sydney. In the “tower block”, apartments are positioned around a central lift lobby. In this set up, there is a minimum of corridor space, but on the other hand the number of units that can be served by the single lift lobby is limited. Here, the efficient arrangement of circulation space is offset by the rather inefficient sharing of lifts by a small number of housing units.

In this tower block, circulation takes up 11.9% of the floor area; the lift only serves 7 units on this floor.

The scissors corridor is a clever innovation, introduced by Le Corbusier in Unite D’Habitation in Marseilles. Here, internal double loading corridors serve two rows of maisonettes opposite each other in an interlocking arrangement. 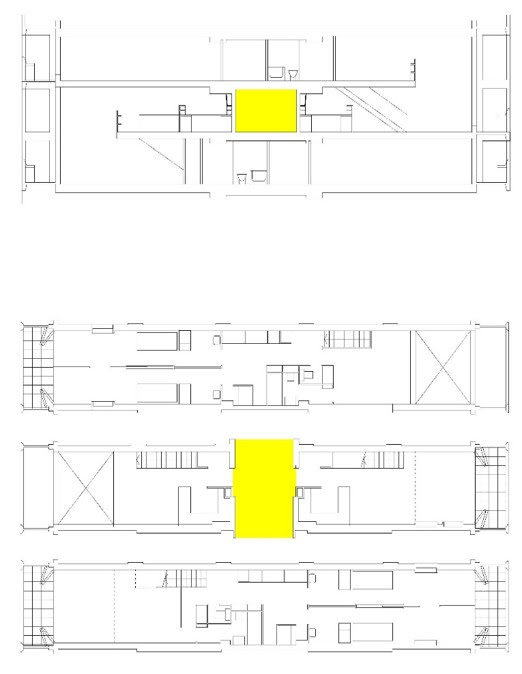 These corridors – and the ‘skip-stop’ lifts - are only required to serve every three floors. The percentage of floor space taken up by the central corridor is very low at only 8.12% of the three floors served by the corridor, and the lifts in this case need only stop on one floor and skip the other two: that one stop serves 58 units.

This is an extremely efficient layout, and is not more common because the corridor in this type of layout is rather long, narrow and has almost no windows. Also, the apartment units are also designed to be long and narrow, with bedrooms that hardly seem to be able to fit a double bed. Still, considerable ingenuity has been applied to securing the efficient deployment of circulation space and lifts. 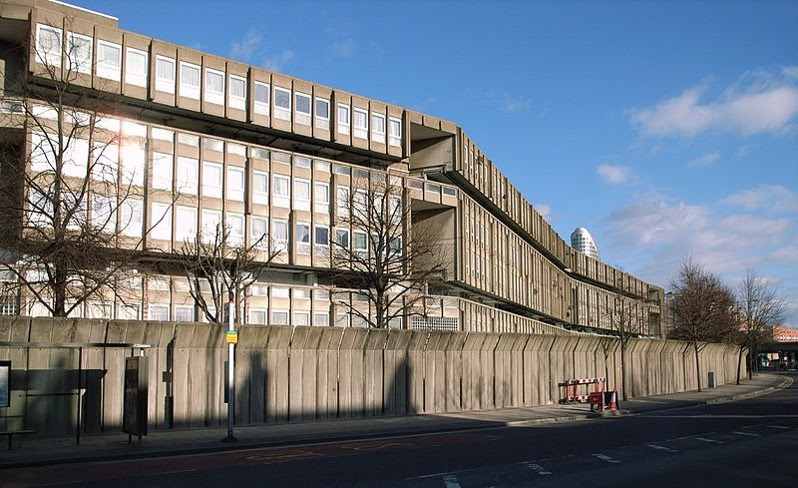 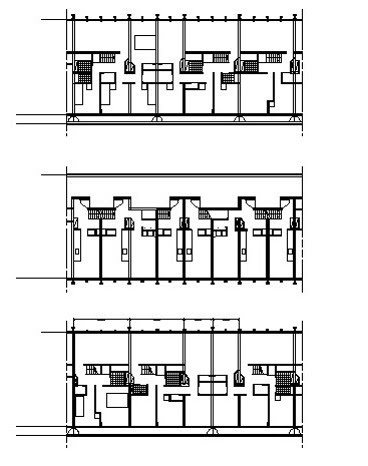 In the 1970’s, Alison and Peter Smithson developed an improvement on the scissors corridor layout concept by having single loading external corridors. Here, the quality of the access corridor was much improved. The wide, well ventilated access external corridors were promoted as ‘streets in the air’. Here the circulation space was not as efficient as Unite D’Habitation but was still good at 12.58%. 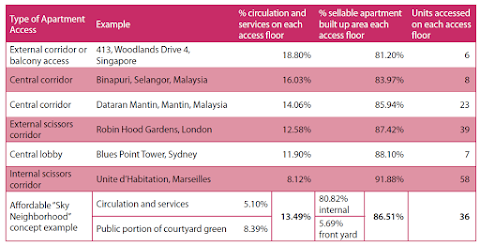 Even after adding in the communal courtyard space to circulation space, the total for it, at 13.5%, is lower than the circulation space in the majority of conventional apartments. This is very substantial efficiency improvement that is all the more remarkable because it is achieved by making the apartment design more attractive, not less, by extending the benefits of having a landscaped sky court to every apartment. Indeed, the introduction of the sky court is the key.

However the comparisons done in this study only took account of typical floor plans; they did not take into account the area breakdown of the whole tower block. As such any amenities for social use found on the ground floors or on intermediate floors of these blocks were not taken into account.

Posted by Mazlin Ghazali at 6:58 PM

Climate might come into it too. An access balcony might be OK in the tropics (Singapore) less so in Britain which tends to be cold and damp for most of the year.

Harry Seidler designed some interesting crossover maisonettes where the entry levels were half a level above and below the corridor.

His work is worth closer study.