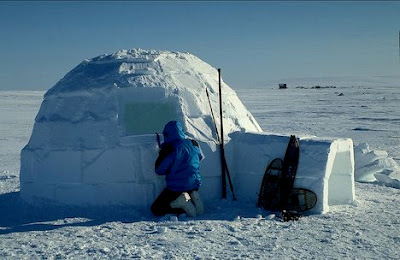 The igloo is an intriguing structure made from thick slabs of tightly packed, dry snow. It forms the shape of a dome that, amazingly, is able to stand without additional support or the probability of caving in. It is a normal dwelling place of the Inuits during the winter season. The building of an igloo requires skill, a lot of energy and a large knife or a snow saw, known as an orsulung. It can be built from the outside but is said to be preferred form the inside, especially during a blizzard. A snow slab varies in measurements, depending on the size of the igloo. 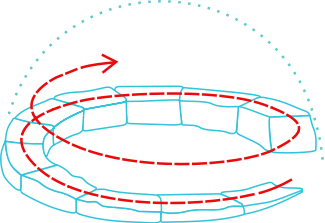 First, a few snow blocks similar in size are arranged in a circle with enough space for habitation and a gap for the entrance. The first layer is then cut in a slight upward and inward curve to enable a continuous build of a dome shape. The last block, also known as the key block, which would be placed on top of the igloo, must initially be larger than the hole for it to be placed topside down. The completed igloo is powdered with snow to seal any gaps and a few ventilation holes are made. Inside the igloo, a lower level and a tunnel is cut out to prevent the cold air from entering. 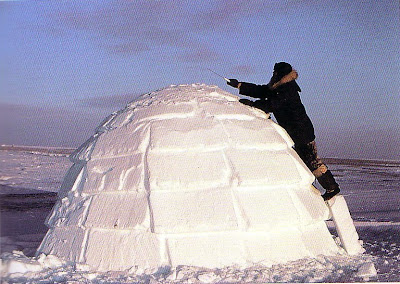 The thawing and freezing of the snow on the igloo will form a smooth layer of ice, making the structure stronger.

Contributed by Kim Casey
Posted by Mazlin Ghazali at 12:09 AM

I never new how they built the igloo. Now I know. Seems that it is real art to create an igloo.

Thanks you for a very good article. I read it to Svet and see really liked it.