This a review of The Skycourt and Skygarden: Greening the Urban Habitat by Jason Pomeroy
Routledge, Nov 20, 2013, 304 pages

In this scholarly book, Jason Pomeroy (an architect based in Singapore and Professor at the University of Nottingham) provides a compelling case for introducing green social spaces to the upper levels of tall buildings. Commercial pressures, which we can find expressed through high land prices, are pushing cities to grow taller. Together with the overburden of cars, public spaces – streets and squares - in cities are also becoming a depleting asset. Sky gardens and sky courts in tall buildings can help replenish the need for spaces where people can congregate. Like arcades and malls – semi-public spaces that allow public access though privately owned – sky gardens and sky courts are able to serve some of the multiple functions that traditional public spaces provided.
The skygarden can be traced back to the "Hanging Gardens of Babylon" which had multi-tiered landscaped terraces and a mechanical irrigation system. With the advent of passenger lifts, buildings have become taller and more common in the last 150 years, yet it wasn’t until the late 20th Century that skycourts took off, Ken Yeang’s IBM Tower in Malaysia being an early example. The flat roof top is the most obvious place to put in gardens, but skycourts – landscaped extra-large balconies on intermediate levels of modern skyscrapers – have become another important option. 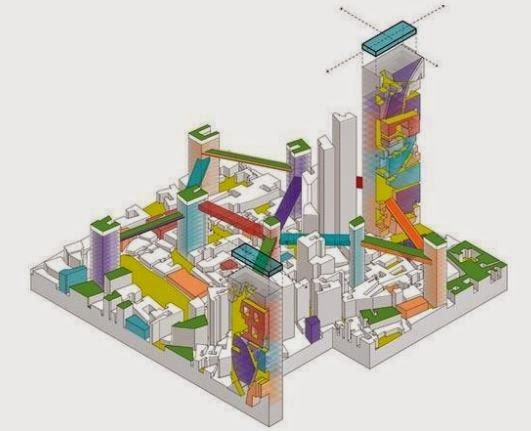 The author elaborates on the usefulness of sky courts and sky gardens from many aspects: as a way to make high-rise high-density environment seem less crowded, to provide an arena for social interaction, as the vertical equivalents of streets and squares on the ground for high-rise buildings, as an environmental filter to improve the micro-climate around and inside tall buildings, to make people happier by tapping the into the innate human love of nature, as an opportunity to improve biodiversity in urban areas and as something that can help increase revenue for building owners.
The middle sections of the book contains a very interesting range of case studies, categorized into built examples, those under construction, those still on the drawing board and a collection of futuristic work by students and academics. They exhibit a diverse menu of ways skygardens and skycourts can be added to tall buildings; with a strong hint that even more innovation will emerge.
The book concludes with the author’s recommendations on the way forward. The most interesting among them: that just as the segregation of use by zoning in city planning is being challenged, the same logic should be extended vertically so that tall buildings should contain within them a mix of residential, social and commercial uses; that the utilitarian treatment of circulation space in tall buildings should make way to a more generous approach, taking into account the social functions that the spaces can serve; that new ways to increase density without removing existing structures should be explored.


I believe that as tall buildings proliferate around the world, sky gardens and skycourts appear destined to becoming a more common feature. Architects, city-planners, developers and academics who are interested in the future of skygardens and skycourts in high-rise design do not have a wide choice of books to choose from. Prominent architect, Ken Yeang, has long argued for them in his books – the most recent and relevant one being “Eco-Skyscrapers II” published in 2011 which documents his latest works and thinking (he also wrote the forward to this book). “Vertical Garden City, Singapore” by Tan Puay Yok in 2014, chronicles the impressive strides made in in the city-state in extending greenery to the upper reaches of tall buildings. Compared with these two excellent books, Pomeroy’s gives a wider overview of the field, providing a broader range of arguments and examples, more ready to become a text-book for an architectural trend that in my opinion is poised to become mainstream.

Disclosure: Jason Pomeroy who sits on the editorial board of the Council of Tall Buildings and Urban Habitat reviewed my paper that was recently published in its Journal.
Posted by Mazlin Ghazali at 1:14 PM