The Round City of Baghdad

In 754, al-Mansur became the second Abbasid Caliph who commissioned the construction of a new capital - Baghdad.

During al-Mansur's reign there was a rapprochement between that Persians and Arabs. Persian literature and scholarship became appreciated in the Islamic world. 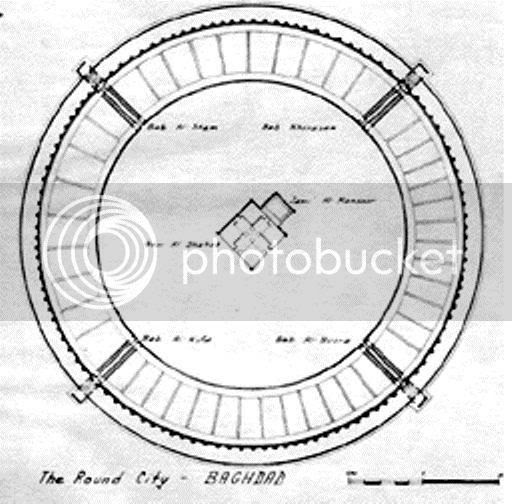 Plan of the Round City of Baghdad, from www.faculty.fairfield.edu

Baghdad’s round plan found Persian precedents such as Ectabana, Hatra and Firouzabad. According to Manouchehr Saadat Noury (Persian Journal, 2005) two designers who were hired by Mansur to plan the city's design were two Iranians named Naubakht-e-Parsi, a former Persian Zoroastrian, and Mashallah-e-Assiri, a former Jew from Khorassan (a northeastern province in present-day Iran).

The city was designed with ash drawings onto the ground for al-Mansur to view prior to construction, which began that same year. By its completion in 766-7, it has been posited that the Round City measured 2000 meters in diameter.

It featured four main gates, equidistant from each other: the southwest gate was the Kufa Gate; the southeast was Basra; the Khurasan Gate extended to the northeast and the Damascus Gate to the northwest. The walls were constructed out of mud brick with reed supports, while the domes and vaults were composed in baked brick.

What happened to this structure during the war. Is it still intact? Or did it not in essence exist at this time frame. I mean was it incorporated into the moderen city and lost forever??

2000 meters is 50 meters larger than the last round city you posted.

These are so cool!

I wondered myself. I've just finished researching on that topic. The three word answer is "destroyed by Mongols".

what was the height of the outer wall of the city? have any fact about that? I'm doing a small research about the city.. :)

The four surrounding walls of Baghdad were named Kufa, Basra, Khurasan, and Damascus; named because their gates pointed in the directions of these destinations [9]. The distance between these gates was a little less than a mile and a half. Each gate had double doors that were made of iron; since the doors were so heavy it took several men to open and close them. The wall itself was about 145 feet (44 m) thick at the base and about 39 feet (12 m) thick at the top. Also, the wall was 98 feet (30 m) high, which included the merlons, a solid part of an embattled parapet usually pierced by embrasures. This wall was surrounded by another impressive wall that consisted of 165 feet (50 m) and was extremely thick. The second wall had towers and rounded merlons, which surrounded the towers. This outer wall was protected by solid glacis, which is made out of bricks and quicklime. Beyond the outer wall was a water filled moat [http://en.wikipedia.org/wiki/Baghdad].

I found this site using [url=http://google.com]google.com[/url] And i want to thank you for your work. You have done really very good site. Great work, great site! Thank you!

1. Changes in the mechanism for displaying thumbnails in the taskbar.

2. Pop-Up lists for the panel

4. Applying the settings of the taskbar

7. You can search for music by artist

8. View the contents of the search results

11. Changes in the panel Devices and Printers

12. Changes in the mechanism of extraction devices

14. Reduction in section in system

17. Assigning a letter to boot with two OS loaded

18. Naming the section reserved for the system.

good daypeople this is a great forum hope im welcome :)

Thanks for the info.